Montage believes the Koné deposit has the potential to become the centre of gravity in new gold district with the potential to exploit numerous small, higher-grade satellite deposits the effect of which will be to further improve Project economics.

The Project is ideally situated near existing infrastructure and is accessible year-round via asphalt road and has access to ample water resources. 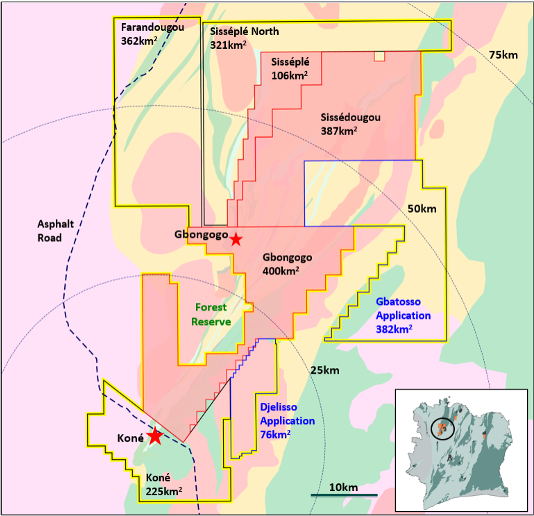 Over the last 12 years exploration on the Koné Gold Project (formally the Morondo Gold Project) has been run by the same local team working for a number of different companies but throughout under the direction of Montage CEO, Hugh Stuart.

The application for the Koné Exploration Permit was made by Red Back Mining in 2008 with soil sampling and trenching leading to the first shallow drilling by Red Back in 2010 just prior to the company’s acquisition by Kinross.

In 2013, Sirocco Gold, run by the ex-Red Back Management optioned the permit from Kinross and completed follow up shallow RC drilling defining the extents of the Koné deposit.

In 2017, Orca Gold, again run by the same ex-Red Back management acquired the full permit package from Kinross for stock and the pace of exploration increased with the first deeper RC drilling, 528m of core drilling to provide samples for initial metallurgical test work and following positive results a 13,360m RC program leading to the Inferred Mineral Resource Estimate in October 2018 (the “October 2018 MRE”).

Exploration completed by Montage from its formation in August 2019 up to the point of its initial public offering (“IPO”) in October 2020 focussed on expanding the knowledge of the Koné deposit at depth and extending surface geochemistry across previously unsampled eastern part of the permit.

Upon completion of the Company’s IPO, Montage first conducted a 20,000m expansion drill program during Q4 2020, targeting resource expansion below the depth extent of the October 2018 MRE. This drilling was successful in delineating a 4.00Moz Inferred Mineral Resource Estimate in January 2021 (the “January 2021 MRE”).

The Koné Gold Project lies over the southern part of the Birrimian aged Boundiali Basin and covers the extensions of the regional scale and highly prospective Tongon and Syama shear systems.

The mineralization at Koné is hosted within a 150-330m wide complex quartz diorite package which dips 45-50° west and strikes north-south, and is interpreted as a series of intrusions rather than a single coherent intrusion. The diorite package is intruded into folded mafic volcaniclastic country rocks. Metamorphic grade in the area is upper greenschist to lower amphibolite facies. A foliation striking north-south and dipping 45-50° to the west is consistent throughout the area.

The hanging wall contact of the diorite package with the overlying volcaniclastic package is well defined by current drilling and is marked by thin dykes of diorite and a 10-20m thick, barren diorite body.

In the footwall, mafic volcaniclastic rocks dominate the geology and are also intruded by thin, foliation parallel diorite dykes which have weak gold values associated with their contacts. Folds observed in the volcaniclastic rocks typically plunge between 10-40° towards the southwest.

The diorites are coarse to fine-grained, grey in colour and composed of domains of plagioclase ± quartz and domains of mafic minerals – dominantly biotite. Grain size variations are common and coarse grained and fine-grained variations are captured by the core logging and often have sharp, measurable contacts which suggest the diorite is a polyphase composite intrusive with multiple pulses of diorite (of the same composition and appearance) intruding into each other. However, the coarse and fine components of the package can also have soft gradational contacts and grade into one another progressively.

Mineralization at Koné is characterized by mineralized true widths of between 170 and 330m at average grades of between 0.5g/t and 1.2g/t.

The diorite intrusion is consistently mineralized with gold associated with 1-3% fine, disseminated pyrite with elevated gold grades related to an increase in the frequency of 1-5mm quartz + calcite + pyrite veinlets which are oriented north-south and dipping 45-50° west, consistent with the foliation.

Hydrothermal alteration is weak and dominated by biotite. Silicification is rare. 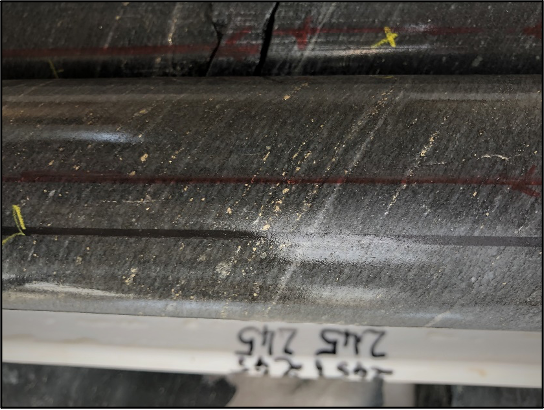 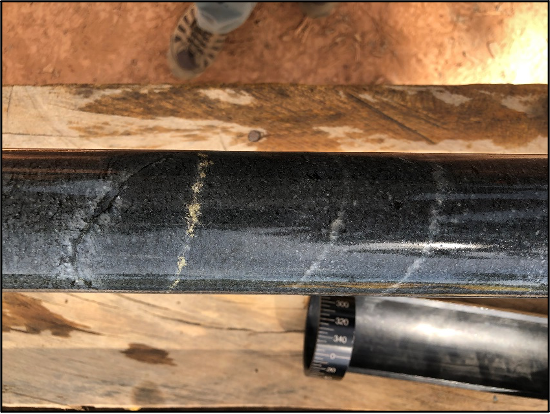 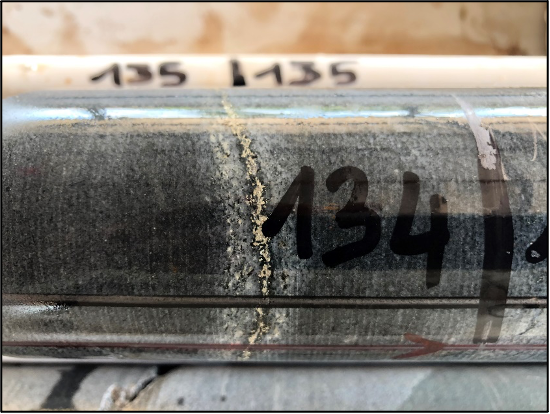 The cross section below illustrates the resource shells from the January 2021 MRE, the August 2021 MRE and the May 2021 PEA. The section clearly demonstrates the remarkable continuity of mineralization across extreme widths, the natural dip of the deposit as well the presence of higher-grade portions within the resource. It is these attributes of the Koné deposit that position the KGP to be a low-cost, large scale open pit as demonstrated by the results of the May 2021 PEA. 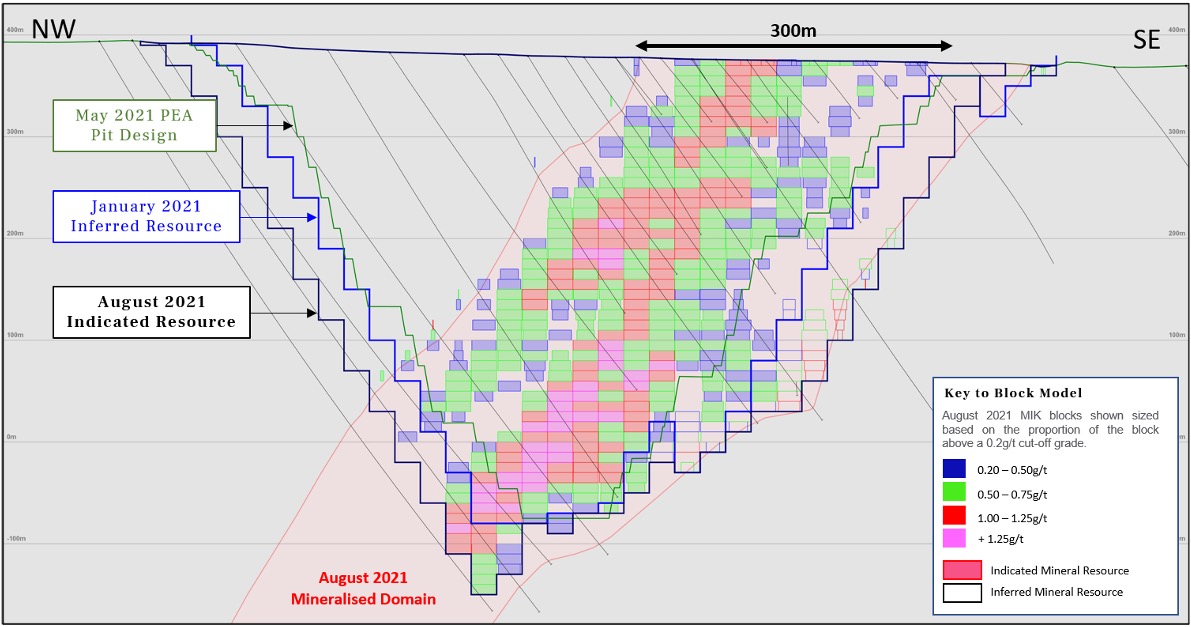